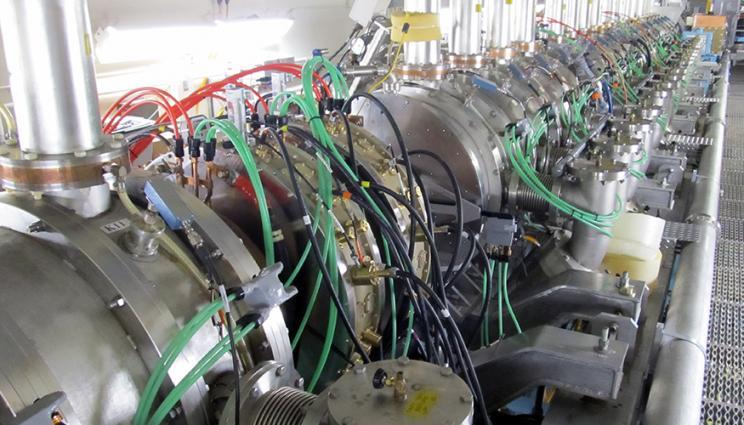 The Bipolar Reset Experiment (BIRX) was conducted at Site 300.

Lawrence Livermore National Laboratory (LLNL) scientists are working on a new diagnostic capability that will provide, for the first time, the ability to make X-ray radiographic movies.

Nathaniel Pogue, accelerator physics group leader in LLNL’s National Security Engineering Division, said the experiment demonstrated the first time that a solid-state pulsed-power system has been used to accelerate (provide energy gain), to kiloamps of electron beam. It also is the first time that a bipolar solid-state pulsed-power (BSSPP) system has been used to accelerate kiloamps of electron beam. This shows rapid growth and maturation of the bipolar pulsed-power technology and accelerator hardware, as well as the ingenuity and resourcefulness of the LLNL team.

“This work will allow scientists to create X-ray movies of items of interest with each frame being 10s to 100s of nanoseconds apart once a full accelerator is made,” he said, adding that each beam pulse acts as a frame in the movie.

These movies would allow researchers working on hydrodynamic experiments to gather 5 to 10 times more images and data than current capabilities. This will provide much more information with fewer experiments, enhancing the capabilities to support the National Nuclear Security Administration’s stockpile stewardship program.

The team conducted the experiment by developing two bipolar cells that were inserted into the FXR beamline. The team then connected two cells to four BSSPP systems that provided the energy to the cells. When the FXR was fired, the power from the BSSPP was pushed into the cells, which then produce a high voltage across its gap to accelerate the FXR beam.

Pogue said an energy analyzer measured the difference in energy, showing that the energy was transferred from the pulser to the beam via the cell. FXR has two modes, single-pulse and double-pulse.

The next step in the project is to finish the design of a test injector that is currently underway and construct the test injector at LLNL. This will help demonstrate an integrated system using this technology that can produce a beam as well as accelerate it. The goal is to have this step completed within the next two years.

Researchers focus on how tantalum behaves at high pressure and temperature