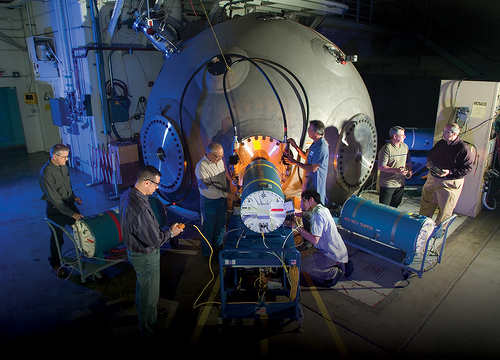 Scientists prepare for a test at HEAF, NNSA's Center of Excellence for high explosives research and development.

DOE/NNSA has identified LLNL's High Explosives Applications Facility (HEAF) as the complexwide Center of Excellence for high explosives (HE) research and development (R&D). In this capacity HEAF is a source of subject matter expertise for high explosives and other energetic materials. Its mission is to provide these expertises to serve multiple government agencies including DOE, DoD, TSA, Homeland Security, the FBI, and other law enforcement and government intelligence organizations. HEAF is well equipped to fulfill this mission.

From its conception, HEAF was designed to integrate the operations of synthesis, formulation, and explosives testing in a single synergistic facility. Today, our nationally recognized team of approximately 120 chemists, physicists, engineers, and technicians contribute to the nation's understanding of explosives by:

No other facility in the world supports such a multidisciplinary mission under one roof.

HEAF provides national leadership in the study of chemical high explosives for many agencies of the federal government. Scientists apply expertise in characterization, formulation, synthesis, and experimentation—integrating experimental data with computer simulations to understand energetic materials in pursuit of the nation's most important national issues. This unique, integrated scientific facility enables HEAF to make major contributions in many areas of national security, including weapon development, homeland security, and counterterrorism. Examples include: