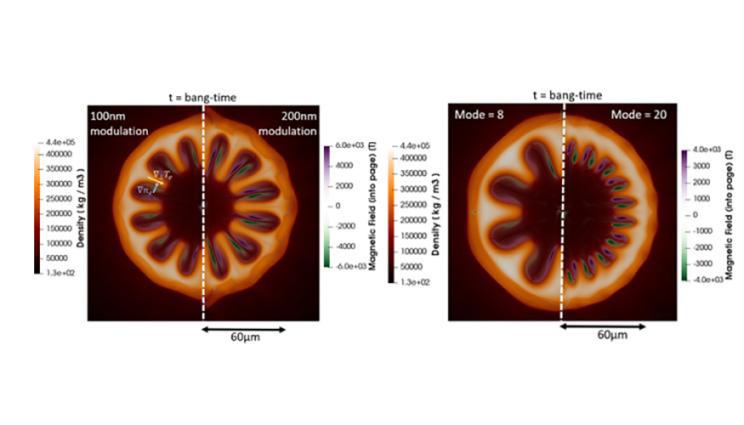 Lawrence Livermore National Laboratory (LLNL) researchers now have a better understanding on how strong the magnetic fields are in an inertial confinement fusion (ICF) implosion at the National Ignition Facility (NIF), the world’s most energetic laser.

Walsh explains that the process of magnetic field generation in the ICF experiments — the so-called Biermann battery effect — is the same process that was the seed for magnetic fields throughout the universe.

The fields also are 100 million times larger than the sun’s magnetic field strength. These field strengths are large enough to modify the path of electrons in the plasma, which change how heat is transported.

The paper shows that there will be short wavelength magnetic field loops within the hot-spot that can alter the performance of the implosions. The hot-spots are shown to be dominated by fields generated during stagnation when the temperature and density gradients are largest. A scaling of hot-spot magnetic flux is derived and compared with simulations. This reveals that perturbations with both larger amplitudes and higher mode numbers generate more magnetic flux.

The model described in the paper allows for greater understanding of which target designs will be susceptible to magnetohydrodynamic effects. The model can be used to ascertain the time when most magnetic flux is generated. If generation is weighted more toward early times, then more high-mode magnetic field loops will be present. A hot-spot with no high-mode perturbations at time of peak neutron production can still contain significant magnetic flux on those scales. By assuming that magnetic flux is transported with the heat-flow, the model can be used to post-process radiation-hydrodynamics data to estimate magnetic field strengths and magnetizations.

“Magnetic fields exist in our NIF experiments, but we do not usually account for them in designing or interpreting implosions,” Walsh said. “The magnetic fields are expected to change how the fuel cools down, which is a crucial process for achieving significant fusion reactions. The magnetic fields also can increase the perturbation growth.”

The magnetic field generation mechanism is like how a battery works and was discovered by Ludwig Biermann. In the case of ICF implosions the huge pressure gradients that we create act as the electric potential that drives a current like a battery.

The work was conducted on Livermore’s Quartz computing system.

“We’ve known for years that ICF implosions can be affected by self-generated magnetic fields, but quantifying the effect and predicting it in modeling has been very challenging,” said Clark, who oversaw the work as ICF program capsule modeling working group lead. “For years, Chris has been blazing the trail on modeling these effects in ICF, from his time as a graduate student and postdoc at Imperial College, London, and now continues to do so here at the Lab.”

Clark said it is a great asset to the Lab to have Walsh working directly with us.

“As the latest implosion experiments have moved to the threshold of ignition with record hot-spot temperatures, self-generated fields could become more important than they have been in the past experiments,” Clark said. “Having a means to quickly and efficiently assess how large the self-generated fields could be in a particular implosion, as Chris’s new model does, is very valuable to the program.”

Researchers focus on how tantalum behaves at high pressure and temperature