—Edward Teller, Memoirs: A Twentieth-Century Journey in Science and Politics

When the Livermore branch of the University of California Radiation Laboratory (UCRL) opened its gates on September 2, 1952, the nation was fighting a "hot" war in Korea and a "cold" war with the Soviet Union. The Soviet Union had detonated its first nuclear device three years earlier—much ahead of U.S. expectations. Nuclear weapons were a new and growing part of the U.S. arsenal and seen as essential for deterring Soviet aggression in Europe. Today, the Cold War is history. Relationships with Russia and other countries of the former Soviet Union are more cooperative than confrontational, but new international dangers have emerged. The development of new U.S. nuclear weapons ceased in 1991; presently, the focus is on improving our scientific capabilities to understand weapon performance in the absence of nuclear testing and to refurbish weapon systems as necessary to keep the existing nuclear stockpile reliable, safe, and secure. 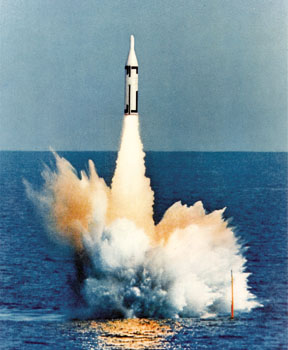 The Polaris missile represents the success of Livermore efforts to develop small, efficient thermonuclear weapons that could be carried by submarine. Polaris's success was critical in establishing U.S. nuclear deterrent capability.

Throughout the half century since its inception, the "Rad Lab at Livermore" (which became Lawrence Livermore National Laboratory in 1979) has helped the nation meet important challenges through innovations in science and technology. The initial challenge, the one that set the stage for all that followed, was the design of nuclear weapons.

The Heart of Innovation

At first, Livermore scientists and engineers were mainly responsible for developing diagnostic instrumentation to support tests of thermonuclear devices "in close collaboration with the Los Alamos Scientific Laboratory." The Joint Committee on Atomic Energy also hoped "that the group at UCRL (Livermore) will eventually suggest broader programs of thermonuclear research to be carried out by UCRL or elsewhere." Under the direction of Herbert York—a 32-year-old physicist designated by UCRL Director Ernest O. Lawrence to "run the place"—the Laboratory's mission rapidly evolved. It was not long before Livermore became the second U.S. nuclear weapons design laboratory.

"Weapons are an integral part of the past and present of the Laboratory," says retired weapons designer Bill Lokke, winner of an E. O. Lawrence Award for innovative weapons design work in the 1960s. "Livermore is one of the two 'goto' laboratories for nuclear weapons research in the nation, along with Los Alamos. A key attribute of our success is our attitude toward innovation. . . . We want to do things the best possible way, find the best possible solution to a scientific problem. Even if it means inventing something new."

Livermore used this approach to explore the heart of nuclear weapons work—improving the performance of fission and thermonuclear weapons through better designs that contributed to better systems for the U.S. military. The Laboratory did not hesitate to tackle bold designs that appeared to be the best solutions, even though pursuit of these solutions had no guarantees of success. Livermore's weapon designers were willing to take risks and to accept failures as part of the process. And failures did occur, a number of them right at the start.

For its first nuclear test, just six months after its founding, Livermore planned to detonate a fission test device of unusual design. The test was to shed light on certain thermonuclear reactions key to two Livermore hydrogen bomb tests planned for 1954. The test device was fastened to a 90-meter-tall tower at the test site in Nevada. When the smoke cleared after the countdown, the tower was still there, albeit in somewhat reduced form. The sad remains of this "fizzle" were immortalized in a photograph that one still finds pinned up in various offices at the Laboratory.