A Mesh and Field I/O Library and Scientific Database

Silo is a library for reading and writing a wide variety of scientific data to binary, disk files. The files Silo produces and the data within them can be easily shared and exchanged between wholly independently developed applications running on disparate computing platforms. Consequently, Silo facilitates the development of general purpose tools for processing scientific data. One of the more popular tools that process Silo data files is the VisIt visualization tool. 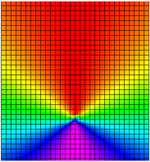 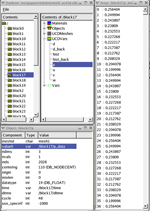 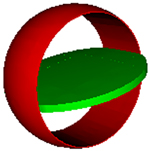 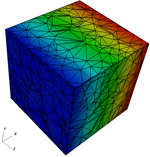 Silo supports gridless (point) meshes, structured meshes, unstructured-zoo and unstructured-arbitrary-polyhedral meshes, block structured AMR meshes, constructive solid geometry (CSG) meshes, piecewise-constant (e.g., zone-centered) and piecewise-linear (e.g. node-centered) variables defined on the node, edge, face or volume elements of meshes as well as the decomposition of meshes into arbitrary subset hierarchies including materials and mixing materials. In addition, Silo supports a wide variety of other useful objects to address various scientific computing application needs. Although the Silo library is a serial library, it has some key features which enable it to be applied quite effectively and scalable in parallel.

Architecturally, the library is divided into two main pieces; an upper-level application programming interface (API) and a lower-level I/O implementation called a driver. Silo supports multiple I/O drivers, the two most common of which are the HDF5 (Hierarchical Data Format 5) and PDB (Portable Data Base) drivers.

The SILO team uses the LLNL listserv list system to make announcements. To join the announcement list, send an e-mail message to LISTSERV [at] LISTSERV.LLNL.GOV with no subject line and a message body containing:

The list is for the SILO team to make announcements to the Silo user community and is not a moderated discussion list.

For any additional questions, contact miller86 [at] llnl.gov (Mark Miller).

Brief History and Background of Silo

LLNL began developing the Silo library in the early 1990s to address a range of issues related to the storage and exchange of data among a wide variety of scientific computing applications and platforms. In the early days of scientific computing, roughly 1950–1980, simulation software development at many labs, like Livermore, invariably took the form of a number of software stovepipes.

Each big code effort included subefforts to develop supporting tools for visualization, data differencing, browsing and management. Developers working in a particular stovepipe designed every piece of software they wrote, simulation code and tools alike, to conform to a common representation for the data. In a sense, all software in a particular stovepipe was really just one big, monolithic application, typically held together by a common, binary or ASCII file format. Data exchanges across stovepipes were laborious and often achieved only by employing one or more computer scientists whose sole task in life was to write a conversion tool called a linker. Worse, each linker needed to be kept it up to date as changes were made to one or the other codes that it linked. In short, there was nothing but brute force data sharing and exchange. Furthermore, there was duplication of effort in the development of support tools for each code.

Between 1980 and 2000, an important innovation emerged, the general purpose I\O library. In fact, two variants emerged each working at a different level of abstraction. One focused on the objects of computer science. That is arrays, structs and linked lists (e.g., data structures). The other focused on the objects of computational modeling. That is structured and unstructured meshes with piecewise-constant and piecewise-linear fields. Examples of the former are CDF, HDF (HDF4 and HDF5) and PDBLib. Silo is an example of the latter type of I/O library. At the same time, Silo makes use of the former.

September, 2021
Announcing the release of version 4.11 of the Silo Library

NOTE: This is a Linux-only update. Windows will be forthcoming shortly.

3. New features in this release

This applies mainly to very old Silo applications prior to version 4.6. Explicitly casting to float** two-level arrays in calls to some of the older Silo functions (e.g. DBPutUcd{mesh|var} or DBPutQuad{mesh|var}) is no longer required and will now result in compiler warnings for C callers and compiler errors for C++ callers.

In the early years of Silo's development, several functions designed to accept two-level arrays of arbitrary type nonetheless defined the function's formal arguments as float** instead of void**. These were changed to void** years ago. However, the configuration option, --enable-legacy-datatyped-pointers, was provided to maintain backward compatability with this old interface.

As part of the work to const qualify the Silo interface, continuing to maintain this backward compatability was becoming too complex. The configuration option --enable-legacy-datatyped-pointers has been eliminated along with the convenience macros DB_DTPTRx (for x=1, 2 and 3).

If you have been in the habit of using the --enable-legacy-datatyped-pointers configuration option and are wondering what will happen when you try to use Silo 4.10 in your application, the most likely biggest issue you will face is to remove cases where have explicitly cast certain array arguments in Silo calls to float**.

Please refer to this discussion for a detailed explanation.

3. Robustness features in this release

4. New features in this release

This is the first, official BSD Open Source Licensed release of the Silo Library.

1. Bugs fixed in this release

2. Performance-oriented features in this release

3. Other new features in this release

NOTIFICATION OF COMMERCIAL USE

Commercialization of this product is prohibited without notifying the Department of Energy (DOE) or Lawrence Livermore National Laboratory (LLNL).

For more information on availability of Hzip and FPzip compression, contact the developer, Peter Lindstrom, lindstrom2 [at] llnl.gov.

Silo 4.7.2 is link-time compatible with 4.7.1 except for codes using DB_LONG_LONG. This is because the way DB_LONG_LONG was being handled in the Silo header file had to change to correct a problem with it.

Critical bugs fixed in this release:

Other bugs fixed in this release:

Organization of information in this release announcement

1. New features added in this release

Silo has a smaller tarball for 4.7 now available for your use. Here is a smaller silo-4.7-smalltest.tgz tarball to use.

Organization of information in this announcement.

A. New features in this release

B. Bugs fixed in this release.

First, have no fear, if you REALLY DON'T WANT TO DEAL WITH THIS, then just make sure you configure Silo with --enable-legacy-datatyped-pointers.

It has been a source of confusion to many users of Silo for many years that functions like DBPutUcdmesh accept an 'int datatype' argument to specify the datatype of the coordinate arrays but than the coordinate arrays themselves are specified as 'float *coords[]' in the API. Users either discovered on their own or asked Silo developers if it is OK to pass pointers to arrays other than float. Indeed, it has been. The same has also been true of the struct objects that Silo returns in its read interface. For example a DBucdmesh object contains an 'int datatype' member to indicate the datatype of the 'coords' member. However, the coords member type was still float* leading to still other confusion when trying to read Silo data. This problem has existed throughout most of the older functions and objects of Silo's API but has been avoided with newer functions and objects by appropriate use of 'void*'. Nonetheless, this behavior for older functions and objects has often led to questions that would have to be fielded by Silo developers.

Starting in version 4.7, all these cases have been 'modernized' to use 'void *'. But, this can be controlled during configuration of the Silo library using the --enable-legacy-datatyped-pointers. This way, if you are comfortable using the old (legacy) conventions, you are free to continue doing so. Support for this will never be removed from the Silo library. However, new users of Silo will most likely compile Silo without this option and experience a less confusing interface. Regardless, the Silo User's manual documents only the modernized interface.

Note that the effect of these API changes are confined primarily to the read half of Silo's interface. So, if you are simply writing Silo files but not reading them, you should experience no errors. Furthermore, on the read half of the interface, the issues you will encounter are compiler errors when you access a void* data member of a Silo object without properly casting it to the desired type, which is specified by an associated 'int datatype' member of the object. Also, since any application reading double precision data would have had to deal with this already to avoid compiler warnings in assigning float* to double*, and since those warnings will become outright errors, the cases that need any attention to be made compliant with the modernized API should be obvious and easily corrected.

Silo 4.7 is NOT link-time compatible with any previous versions. To use it, you will need to re-compile any Silo client code.

Organization of information in this announcement.

A. New features in this release

B. Other general information

C. Bugs fixed in this release.

The following Silo user guides are available for download:

Other Information on Silo

Each row in the table below is an example of the use of Silo to represent a different kind of scientific data. Each example shows a picture of the data (visualized with VisIt), describes some of the key concepts the example demonstrates, lists the set of Silo functions the example uses and provides links to both C or C++ source code used to generate the data as well as the resulting Silo data file. Almost all of the examples here use the Silo functions DBCreate, DBClose and so those calls are not explicitly mentioned.

Key concepts: Representation of parallel decomposition of data using multi-block objects, grouping of blocks into 'groups' using '_visit_domain_groups' convention and other conventions, use of directories.

Without Mrgtrees, a multiblock mesh of Quadmeshes representing the different patches of an AMR hierarchy is not properly organized into an AMR hierarchy. The Silo file examples provided here contain two multi-block representations of the meshes, one without an Mrgtree and one with, so you can understand the difference and what the Mrgtree information is doing.