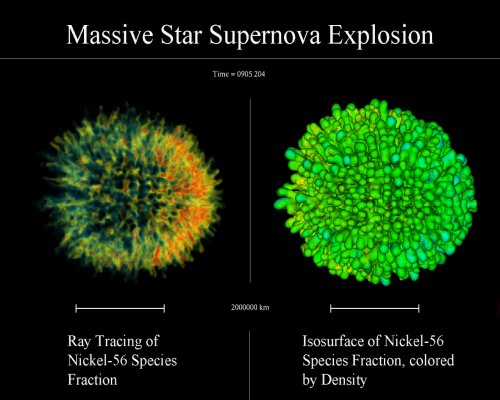 The DJEHUTY stellar evolution code was used to calcuate the explosion of SN 1987A model in three dimensions, including the production and distribution of radioactive Ni-56, which powers most of the light emanating after the first few days. The explosion was initiated by placing 2 × 1051 ergs of energy within the innermost 150 km of the model. The initial density field was perturbed 10% to allow instabilities to grow, which is mandated by observations. Self-gravity was run in the spherical approximation but was centered on a self-consistently calculated center of mass. The simulation encompassed the whole star, contained 11 million cells, and was run on 512 processors of LLNL's Frost supercomputer for 36 hours. The resulting dataset was approximately 2 terabytes.