FVCOM Gulf of Maine Simulation Snapshot of Density and Velocity 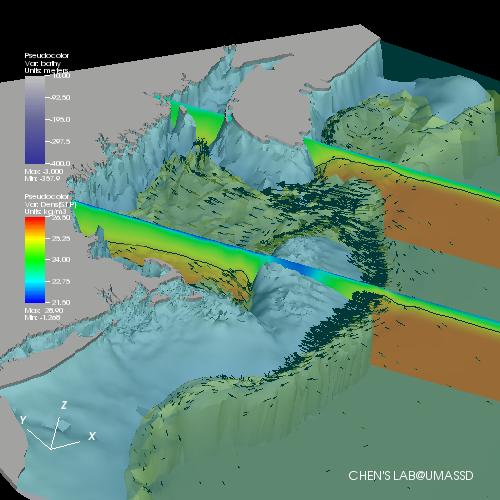 Finite Volume Coastal Ocean Model is a prognostic, unstructured-grid, free-surface, 3D primitive equation coastal ocean circulation model developed at UMASSD and WHOI. VisIt draws FVCOM data from a 2-year Gulf of Maine simulation during a rising tide in August of 1999. The bathymetry is shown in gray while the sea surface is transparent blue. A surface of constant density (1025 kg m3) is transparent orange with its intersection on two vertical sections is shown in black. The vectors show a few of the model velocities on the constant density surface as the rising tide rushes in to fill the gulf of Maine.

Image courtesy of David Stuebe from Chen's Lab at University of Massachusetts, Dartmouth.