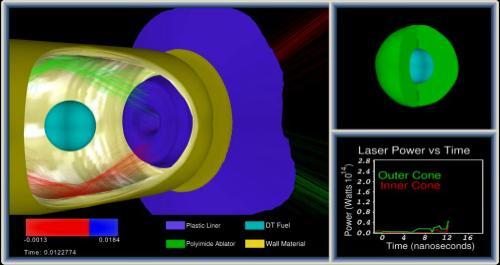 The featured visualization shows the motion of materials and the paths of laser rays in a 3D HYDRA simulation of a NIF ignition target. The simulation models the entire target, including all of the relevant features and the detailed laser illumination pattern. It was performed on LLNL's massively parallel IBM ASC Frost platform. The image's left window shows a cut away view of the material boundaries. Representative rays from two pairs of the laser beams are shown in red and green. These burn through the hohlraum window and fill gas (not shown).

Once they reach the hohlraum wall their energy is efficiently converted to x-rays which heat the capsule. The upper right window shows a cut away view of the capsule ablator and fuel boundaries. The fuel region converges until ignition time, and then undergoes rapid expansion.