WCI uses the following cutting-edge facilities in conducting its mission to ensure the safety, reliability, and security of the U.S. nuclear stockpile without nuclear testing, develop advanced manufacturing and materials technologies to maintain our nation's stockpile, and to ensure the safe dismantlement of retired weapons.

The High Explosives Applications Facility (HEAF) is a NNSA Center of Excellence for high-explosives research and development. Research at HEAF has focused on the high explosives (HE) used in the main charge, booster, and detonator of a nuclear weapon's firing system. Researchers conduct performance and safety testing aimed at ensuring that the HE in nuclear warheads will be dependable over many decades. [More about HEAF]

Site 300 was established in 1955 for explosives testing. Comprising 7,000 acres in the foothills 15 miles southeast of LLNL, Site 300 supports the Laboratory's nuclear-weapons research and development (R&D) program by assessing the operation of nonnuclear weapon components through hydrodynamic testing using high explosives. [More about Site 300]

The B453 Simulation Facility houses the new IBM 20-petaflops supercomputing system, Sequoia, which will help continue to ensure the safety and reliability of the nation's aging nuclear deterrent. Sequoia is one of the most powerful supercomputers in the world and is focused on strengthening the foundations of predictive simulation. The facility also houses a five petaflop unclassified clone of Sequoia, called Vulcan, which will also be heavily used by WCI, the ASC Alliances, and the Laboratory. [More about the B453 Simulation Facility]

The National Ignition Facility (NIF) is conducting experiments that focus the energy of 192 giant laser beams on a BB-sized target filled with hydrogen fuel. Data from NIF experiments helps to inform and validate weapons-simulation computer codes and bring about a fuller understanding of important weapon physics. WCI's theoretical explanation and detailed simulation models were validated in 35 NIF experiments, which helped solve a decades-long investigation into so-called energy balance. [More about NIF]

LLNL's work with special nuclear materials—including highly enriched uranium, plutonium, and tritium—is conducted at the Superblock facility, one of just two defense plutonium research and development facilities in the U.S. The Superblock supports a wide variety of stockpile stewardship activities sponsored by NNSA, DOE, and DOD including nonnuclear testing of components of weapons and investigating technologies for remanufacture of plutonium parts in nuclear components. [More about the Superblock] 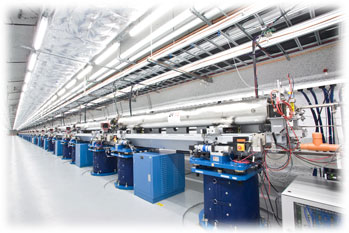 Livermore researchers have been among the first to use the Linac Coherent Light Source (LCLS), which produces ultrashort x-ray pulses more than a billion times brighter than ever produced on Earth. Located at the SLAC National Accelerator Laboratory, LCLS is designed to enable scientists to take stop-action pictures of atoms and molecules in motion, shedding light on the fundamental processes of chemistry, physics, and materials science. [More about LCLS]

The Joint Actinide Shock Physics Experimental Research (JASPER) Facility, located at the Nevada National Security Site, is a multi-organizational research facility managed by LLNL, which also project responsibility. JASPER is capable of generating and measuring data on the properties of radioactive chemical elements at high shock pressures, temperatures, and strain rates approximating the conditions in nuclear weapons by using a two-stage gas gun. The data is used to determine material equations-of-state and validate computer models of material response. The work advances predictive capability, thus ensuring confidence in the nuclear stockpile. [More about JASPER]

The Big Explosives Experimental Facility (BEEF) is a hydrodynamic test facility located at the Nevada National Security Site (NNSS), about 65 miles northwest of Las Vegas. BEEF provides data, through explosive experiments, to support the Stockpile Stewardship Program, along with a variety of new experimental programs that expand the nations's nonnuclear experiement capabilities. [More about BEEF]

WCI makes use of additional experimental facilities operated by other scientific institutions. Examples include: