The High Explosives Applications Facility (HEAF) at LLNL's main site is a DOE/NNSA complex-wide Center of Excellence for high-explosives research and development that has enabled national leadership in the study of chemical high explosives. Scientists apply expertise in formulation and synthesis, integrating experimental data with computer simulations to understand energetic materials. 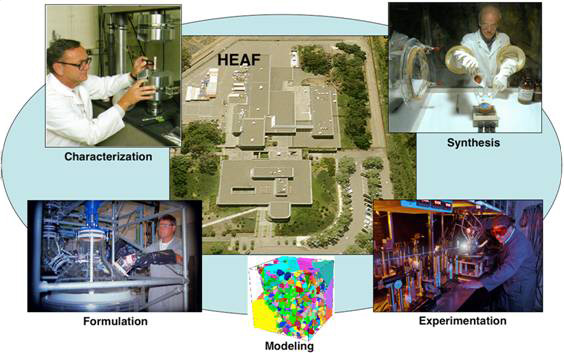 HEAF has seven large fully contained firing tanks for testing explosives and can safely detonate experiments with up to 10 kilograms (22 pounds) of chemical high explosives analyzed with state-of-the-art diagnostics. The facility also has a 100-mm research gun that fires into a specially designed tank for high-velocity-impact studies.

Research at HEAF has focused on high explosives (HE) used in the main charge, booster, and detonator of a nuclear weapon's firing system. These efforts have enabled the design of and improvements to the nuclear stockpile. Toward that end, researchers conduct performance and safety testing aimed at ensuring that the HE in nuclear warheads will be dependable over many decades. Routine stockpile stewardship tests examine the physical, chemical, detonation, and mechanical properties of HE taken from the nuclear stockpile.

Work at HEAF includes the development of new explosives in the synthesis and formulation laboratories, explosives properties testing, hydrotest and diagnostic development, diamond-anvil experiments for basic explosives-properties research, a microdetonics laboratory for explosives studies at the micron scale, and multiple firing tanks for explosives testing at larger scales.

More recently, work at HEAF has expanded to include research and development for advanced conventional weapons for the Department of Defense, including new gun propellants, bombs designed to penetrate hard targets such as underground reinforced concrete bunkers, and high-speed explosive projectiles for defeating thickly armored vehicles.