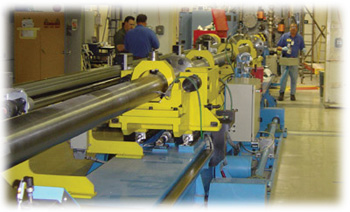 JASPER is a two-stage light gas gun, about 20 meters long, with a target chamber inside an 8-foot diameter containment chamber at the end.

Projectiles are loaded into the primary stage, which is fired with up to 8 pounds of gunpowder. The resulting detonation pushes a heavy piston into the tube filled with a gas, such as hydrogen. The piston's action heats and compresses the gas to thousands of pounds per square inch. Once the heat and pressure are high enough, a small steel rupture disk bursts, accelerating the projectile into the second stage at up to about 17,000 miles per hour (about 10 times faster than a hunting rifle).

JASPER is capable of generating and measuring data on the properties of radioactive chemical elements at high shock pressures, temperatures, and strain rates approximating the conditions in nuclear weapons by using a two-stage gas gun. The data is used to determine material equations-of-state and validate computer models of material response. The work advances predictive capability, thus ensuring confidence in the nuclear stockpile.